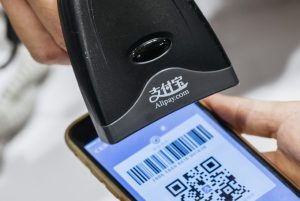 China’s central bank has reportedly put the brakes on mobile and e-commerce payment schemes in the past, mostly from the standpoint of having a wary eye on third-party players elbowing their way into financial services.

While the People’s Bank of China understands that QR code payment schemes are popular in China, there’s a trust issue when those schemes are not originating from familiar parts of the market.

In 2014, the People’s Bank of China placed a temporary ban on QR code schemes in the country, citing security concerns and the need to halt the launch of “virtual credit cards” from non-bank entities. It was also considered a move by China to keep a close eye on how bitcoin and other cryptocurrencies were going to develop, while also not allowing financial institutions to set up accounts on third-party platforms.

China’s central bank is now tightening rules on QR code mobile payments, setting daily limits on the amount consumers can spend on transactions initiated through bar code scanning, according to reports in the Financial Times and the China News Service. China also wants to stop certain subsidies to merchants that are designed to capture market share from competitors.

“The level of growth in e-commerce in China is so wild, it reminds me of 2000 to 2005 in the U.S.,” said industry analyst Steve Mott, principal of BetterBuyDesign. “A lot of people were trying to put in rules regarding e-commerce transactions, and I think that is the case here.”

Though unclear if there is any connection, the central bank ruling comes almost immediately on the heels of EMV standards body EMVCo citing Ant Financial as one of the consortium’s technical advisers. It was speculated in Chinese media that the move would enable the Alipay QR code system to contribute to broader specifications for mobile payments globally.

Ant Financial, operator of Alipay, and its competitor Tencent, operator of WeChat Pay, would be most affected by any financial edict from China’s central bank. After all, Alipay and WeChat accounted for nearly $3 trillion in digital payments in China in 2016, according to a China Money Network report.

This marked a massive increase of 2,000% since 2012, giving those two payment schemes nearly two-thirds of all Chinese digital payments, the report noted.

China’s governing powers know this spike is linked to the overall popularity of social media platforms in China, another arena that has caught the attention of China’s banks and regulators.

“These companies have expanded like crazy,” Mott said of the key Chinese providers. “China wants to be able to monitor all of the transactions. It’s somewhat of a fervent need to know what these guys are doing in e-commerce and mobile.”

In many ways, China has taken a cue from the major global card brands, Mott added.

“It is similar to what Visa and Mastercard did with 3D Secure and tokenization, in that they want to control and see every transaction that takes place,” Mott said.

While tokenization — the process or replacing a static account number with a secure value called a “token” — has been praised as an overdue security measure for card payments, companies such as Lyft have complained that the process removes their ability to see valuable consumer data.

Indeed, QR code payments in the country are popular, so much so that China UnionPay made a move earlier this year to secure its role in that market by launching a QR-code option for its “QuickPass” method of payment, complementing its Near Field Communication mobile wallet as well as UnionPay chip cards, wearable devices and in-app payments.

In another move to better monitor third-party operations, China’s central bank last summer set a June 2018 date for Ant Financial, Tencent and other mobile providers to route their transactions through a new central clearinghouse.

All of the maneuvers for digital payments also come as China has moved to the forefront of mobile payments, as the central bank has cited nearly $15 million in transactions last year coming from non-bank providers.

Because Alipay and WeChat Pay have become important drivers in the Chinese economy, the central bank decided to force all third-party payment firms to connect to the new clearinghouse by October 2017 and route transactions by June the following year.